Rocky Springs B&B sits on the grounds of the former Rocky Springs Amusement Park which was a hub for entertainment and social activity in Lancaster, PA for more than 100 years.

During the late 1800’s and early 1900’s three steamboats provided transportation on the Conestoga River (located behind Rocky Springs B&B). The Lady Gay, (owned by John Peoples) and The Emma Belle and The Evelyn B. (both owned by Herman Griffiths) traveled from Bridgeport (at Witmer’s Bridge) one mile downriver to Rocky Springs Park and People’s Bathing Resort. Mr. Griffiths was the manager of Rocky Springs Park and lived in the mansion at Rocky Springs (now the Bed and Breakfast) with his family which included his wife, Emma, and children William and Isabella.

Our Emma Belle room gets its name from the steamer, which was named after Herman Griffith’s wife, Emma and his daughter, Isabella.

Sight & Sound Theatre in Lancaster, Pa will launch QUEEN ESTHER in March, with shows running through December 2020. Sight & Sound takes entertainment to a whole new level, with a 2,000-seat auditorium, a 300-ft stage that surrounds the audience on three sides, state-of-the-art technology and live animals. Every show is an unforgettable event offering an uplifting message of hope.

Quilting is a rich part of Lancaster County’s history, and the American Quilter’s Society QuiltWeek will feature these beautiful works of art made in Lancaster and other regions. Lancaster’s annual QuiltWeek event will be held at the Lancaster County Convention Center March 25-28. In addition to displaying the contest quilts, attendees can enjoy a variety of special quilt exhibits from around the world. QuiltWeek will feature workshops and lectures with top quilting instructors, and a huge Merchant Mall with vendors offering the latest machines, fabrics, and other tools used in quilt making.

Rocky Springs Bed & Breakfast is located within a 10-minute drive of the Lancaster Convention Center.

We thoroughly enjoyed our room accommodations and all the amenities—the superb breakfast, the music throughout the house, the beauty and serenity of the whole house, and most of all the gracious, warm, and friendly hospitality of the innkeepers! Thank you so much. 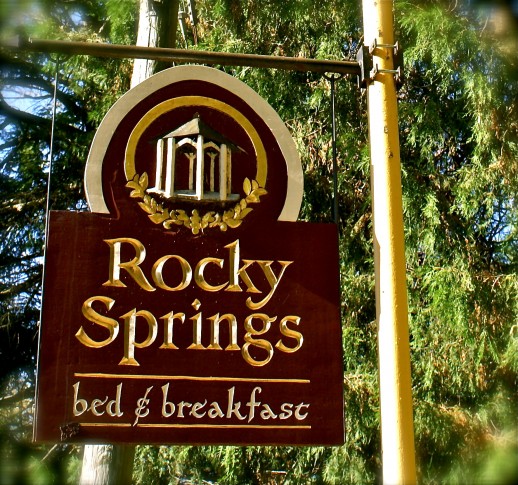